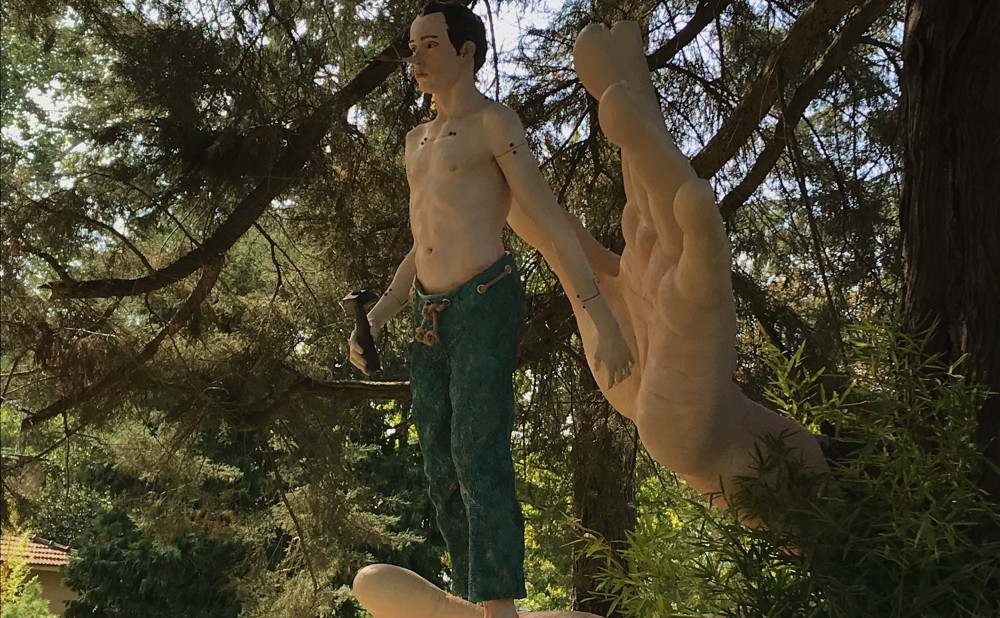 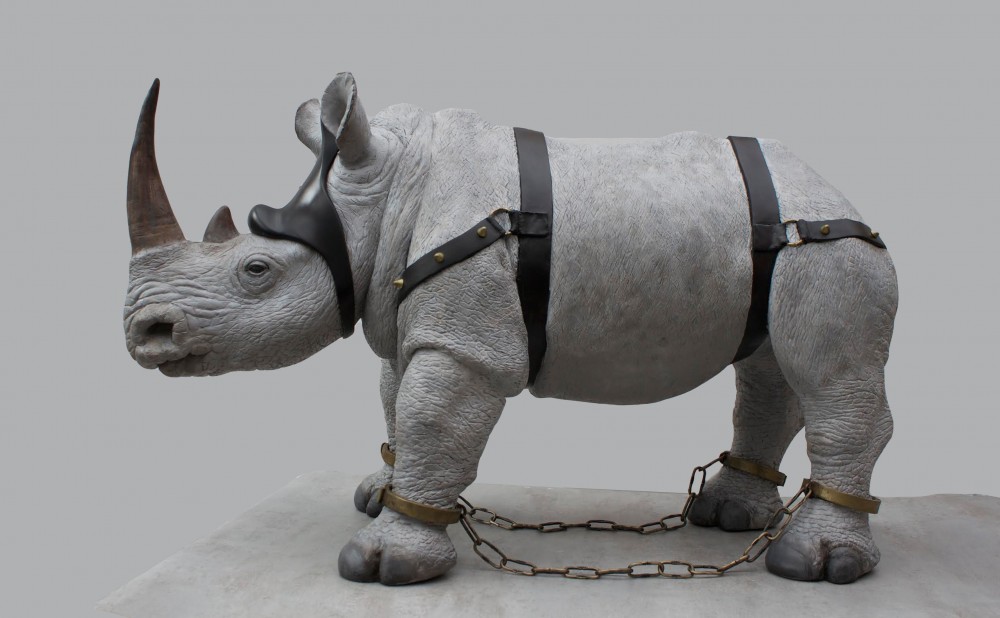 This shackled rhinoceros is a reflection of the creature’s biggest threat to survival, that of mankind. The piece was influenced by Coleridge’s famous poem The Rime of the Ancient Mariner, a bizarre and unsettling narrative full of fantastical imagery and magic that in part questions the morality of man’s attitude towards animals. The poem tells us that all God’s creatures deserve mutual respect and here, The Ancient Herbivore represents a warning, inviting the viewer to question their own prejudices and presumptions. The saddle may be seen as a reference to one of the species closest living relatives, the horse. This animal however is without its rider; he is chained with the saddle on his head, and in a way turning our preconceptions of the animal on their head.  Unlike the traditional almost-domesticated festival elephants often seen in chains, here those of The Ancient Herbivore symbolise its near extinction. The rhinoceros dates back to pre-historic times, roaming the earth for around 50 million years. Then they were woollier, and probably ironically without their horn, the very thing that nowadays is contribute to their near extinction. These magnificent land mammals, which have always played a critical part towards the ecosystem, have a tremendous impact on the structure of their environment. 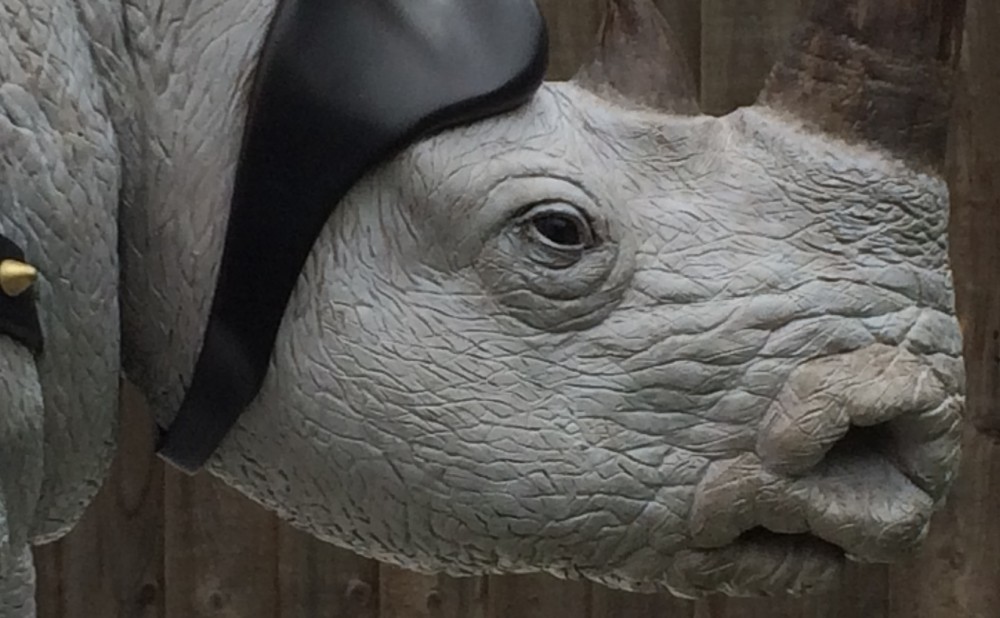 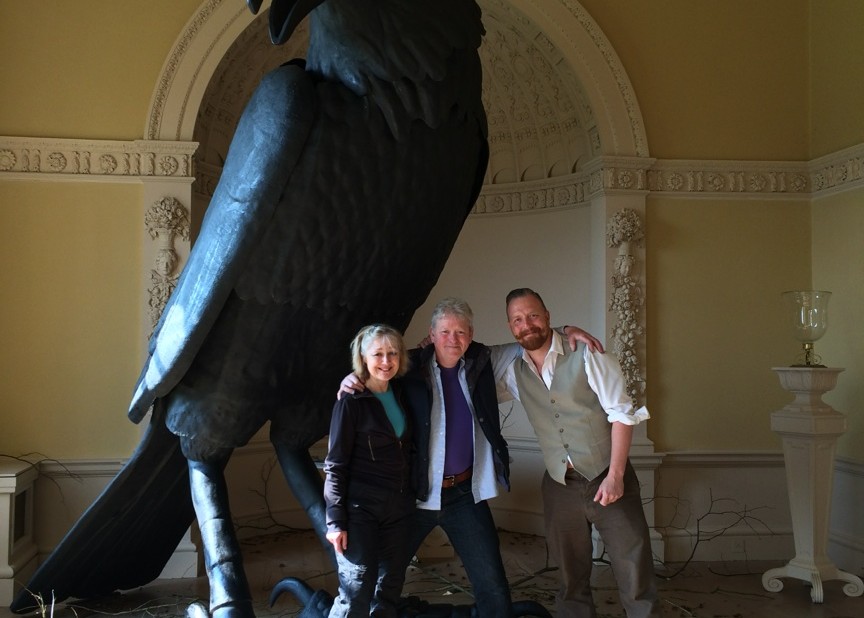 Paul & Laura made a 4 metre (13ft) Crow Sculpture and Giant Eggs as part of two Art Installations for the National Trust’s Fountains Abbey & Studley Royal in Yorkshire. We supplied the Crow Sculpture and Giant Eggs to Gary McCann for his Art Installations at Fountains Abbey. The Follies of the water garden will be transformed from their original use between Saturday 25 April – Sunday 29 November this year for the first time.

The sculptures are in The Temple of Fame and Banqueting House.

Its funded by the Arts Council and here’s the link: http://www.nationaltrust.org.uk/folly

Paul & Laura are showing their sculptures at the Blackheath Gallery’s 40th Year Exhibition alongside a major collection of Sir Peter Blake’s prints. 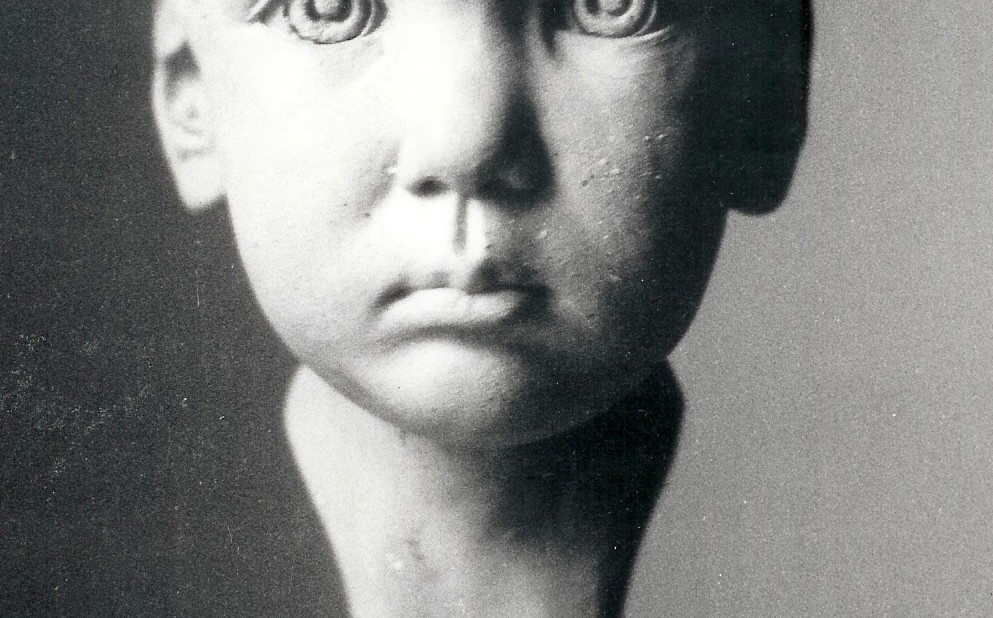 We have donated a sculpture ‘Esther’ to the London Group Draw II. Tickets are £100 and each ticket guarantees a piece of artwork. Viewing daily from 16/04/15, with the actual Draw II on 23rd April at 7pm.

Go To the London Group website for more details: www.thelondongroup.com 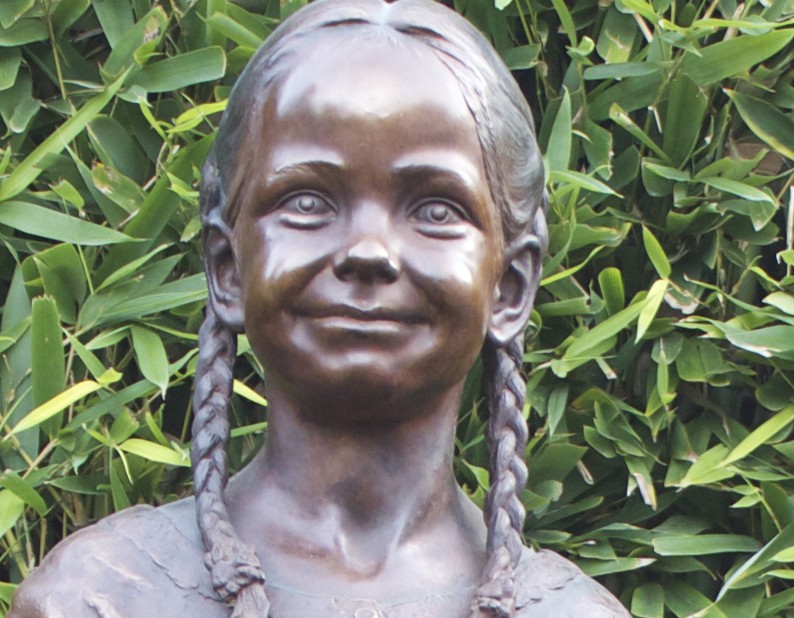 Laura presents sculpture & one of her drawings in this show. Details & Press Release can be found on: www.thelondongroup.com

We are currently showing at Southampton City Art Gallery – the London Group exhibition titled ‘From David Bomberg to Paula Rego‘ runs from 28th June – 1st November 2014.  The work we are exhibiting at the City Art Gallery is a sculpture titled ‘Angel‘. Angel was originally produced and  exhibited in 2012; the piece is based on a soldier, represented as a fragment, war torn and twisted shrapnel. 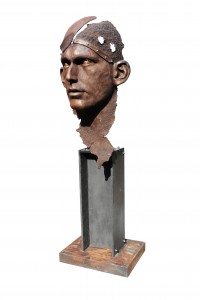 To see the article from The Public Catalogue Foundation please use the following link http://www.thepcf.org.uk/whatwedo/48/reference/893

Previous Shows with the London Group:

Paul & Laura have just completed one of their most challenging projects to date. Created for their Turkish client, the wax portraits portray two workmen accidentally falling through the ceiling in the private collection at the Istanbul Modern Art Museum. The works are animatronic and can swing to-and-fro at the flick of a switch. The only consolation for the desperate pair is they have the most amazing view of the Bosphorus.